Fill up on carbs to drive a hard bargain? 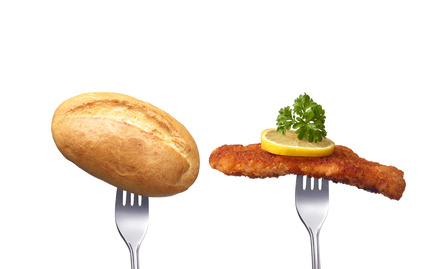 If you have ditched the carbs and moved to a more protein rich diet, you could be more accepting of unfair behaviour than if you were still eating the starch.

Published in the journal Proceedings of the National Academy of Sciences (or PNAS), researchers gave people a meal where the protein to carbohydrate ratio was high and another group where they ate more carbohydrate.

They were then put into pairs and played a game called the ultimatum game. Basically there is a certain amount of money and one of the pair decides how to split it with the other player. But the other player has to agree or they both get nothing. It is logical to accept less than half or you are cutting your nose off to spite your face so to speak. But many people would not accept the lesser amount and so accept the loss to be able to punish the other player’s unfair behaviour.

It turns out that those who had the low carb meal were more likely to accept an unfair deal than those who had more carbohydrates. Apparently, the group eating the low carb meal had a higher level of a dopamine precursor in their blood. Dopamine is released in the reward response so it sounds like they still feel rewarded to receive their cut, even if it is less. The researchers suggest this could have implications for education, economics, and public policy.